There is a strong cultural demand for this precious metal especially during the winter and fall i most developing and developed economies. Typically this commodity is not effected by weather. The farmers in India put some of their earnings in gold, the traditional way of investment and saving in India. The harvesting in India starts typically from the month of September and hence a good growth in Gold sales can be expected.
India was the largest consumer of gold year after year, often buying more than 500 tonnes annually until China started “Gold Hungry” country. These two Asian countries are the largest consumers of gold and hence contributing a lot to the bullion market.

2. Corn :
The harvest expectations are not encouraging ones in the coming year and a great demand for Corn is expected. The United State’s corn stockpiles are expected to fall to a 16-year low by the end of the 2011-12 marketing year. While farmers are expecting an average yield of 146 bushels per acre, the October report projected 148.1 bushels per acre 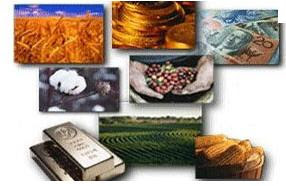 3. Sugar :
Brazil which is one of the largest producers of sugar is not reaching the expectations in the coming marketing year. Aging cane fields under rehabilitation, Poor weather and their national rule that 50% of the domestic sugar cane crop should be used in the ethanol production (for bio fuel industry) made the supplies to sugar hungry countries tighter than the importers could have anticipated.

Thailand, the second largest sugar exporter in the world only next to Brazil is expecting worst flooding in 50 years at the most crucial time. China is the world’s largest consumer of raw sugar and are expected to import between 17 to 23% more in the year 2011-2012.

4. Heating Oil, Unleaded Gas and Crude Oil :
If you following the news regularly the production and consumption of oil is very clear. The U.S. Department of Energy reflected a 4.7 mmbbl increase, but still 28.6 mmbbl lower from the last year. The fears of stockpile depletion have left the U.S inventories at 20-month lows.